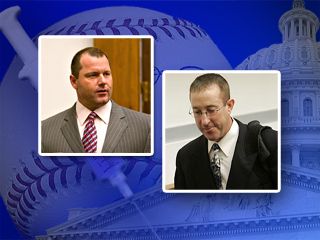 It’s a case of he said, he said on Capitol Hill. Today, both Roger Clemens and his former trainer Brian McNamee were in front of Congress with different sides of the same story.
Brian McNamme says, “I injected those drugs into the body or Roger Clemens at is his direction” but Clemens disagrees, “Let me be clear, I have never taken steroids or HGH.” They both can’t be telling the truth. One of them is lying. But whom? Representative Dan Burton seems to think it’s McNamee who isn’t being honest, “This is really disgusting. You’re here as a sworn witness. You’re here to tell the truth. You’re here under oath and yet we have lie after lie after lie after lie where you–you’ve told this committee and the people of this country that Roger Clemens did things–I don’t know what to believe. I know one thing I don’t believe and that’s you.”
But McNamee insists he hasn’t lied and cites both Andy Pettitte and Chuck Knoblauch as examples of his honesty, “When I told Senator Mitchell I injected Chuck Knoblauch with performance enhancing I was telling the truth. Chuck Knoblauch confirmed. When I told Senator Mitchell I injected Andy Pettitte with performance enhancing drugs I was telling the truth. Andy Pettitte confirmed. When I told Senator Mitchell that I injected Roger Clemens with Performance enhancing drugs, I told the truth. I told the truth about steroids and human growth hormone.”
Even though he wasn’t at the hearing, former Yankees teammate Andy Pettitte was an important part of today’s hearing. last week Pettitte testified that Clemens admitted using HGH. Maryland Representative Elijah Cummings grilled Clemens on Pettitte’s testimony, “Now Mr. Clemens, I’m reminding you that you are under oath. Mr. Clemens, do you think Mr Pettitte was lying when he told the committee that you admitted using Human Growth Hormones?” And Clemens didn’t have much of an answer, “Mr. Congressman, Andy Pettitte is my friend. He will be my–he was my friend before this. He will be my friend after this. And again, I think Andy has misheard.”
Misunderstandings seemed to be the theme of the day. But the committee wasn’t buying that it was just a simple misunderstanding between McNamee and Clemens, especially Oversigh Committee Chairman Henry Waxman, “It’s impossible to believe that this is a simple misunderstanding. Someone isn’t telling the truth. If Mr. McNamee is lying, then he has acted inexcusably and he has made Mr. Clemens an innocent victim. If Mr. Clemens isn’t telling the truth, then he has acted shamefully and has smeared Mr. McNamee. I don’t think there’s anything in between.”
But it’s not all about who said what. McNamee claims to have physical evidence of Clemens’ doping….Bloody Gauze and used syringes with traces of HGH and Clemens’ DNA. But the five year old sample was a hard sell to Representative Burton, “I want to make sure I got this straight. Your friend Roger Clemens, you allegedly gave him these shots. You kept the pads and the needles for five years and went on and kept working for him because he was your employer and then you said you felt bad, you felt bad about proposing and giving these to the Mitchell committee when you first started talking to them.” McNamee’s answer was simple, “Yes, sir.”
At the end of the four and half hour hearing, neither side was backing down. Clemens and his lawyer made a brief statement affirming his innocence while McNamee kept quiet. The Committe didn’t come to any conclusions today, but both Clemens and McNamee could face perjury charges.
-Cynthia Johnson