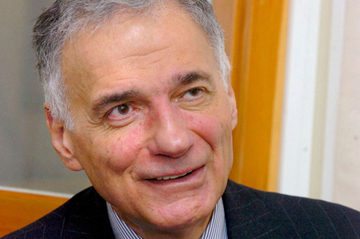 Voters will be seeing a familiar face on the campaign trail. Longtime consumer advocate Ralph Nader is once again running for President. Nader says he’s in the race because the existing candidates are too close to big business This will be Nader’s fifth run to the White House including a write in campaign in 1992.
Candidates already in the race had mixed reactions to Nader’s entry. Republican Mike Huckabee welcomed the additional candidate, but democratic candidates Hillary Clinton and Barack Obama had a different opinion. Clinton said, “Obviously, it’s not helpful to whomever our Democratic nominee is. But it’s a free country,” while Obama added, “He thought that there was no difference between Al Gore and George Bush and, eight years later, I think people realize that Ralph did not know what he was talking about.”
Many Democrats blame Nader for taking votes away from Al Gore in the 2000 election. Nader responded by saying, “If the Democrats can’t landslide the Republicans this year,they ought to just wrap up.”
Nader says he will decide if he’s going to run as an Independent, a member of the Green Party, or a part of another third party sometime this week.