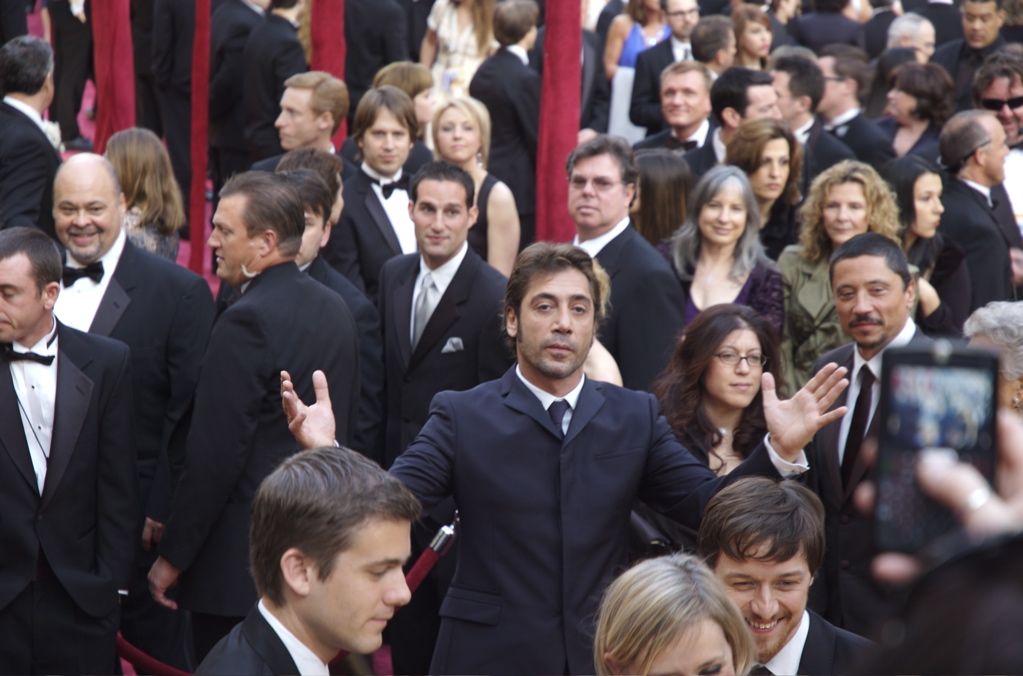 2:00 p.m. We have left our hotel room to travel to the Hollywood Renaissance Hotel where Hallie Anoff and I have credentials for the Interview Room. Over 200 press from around the world have gathered here. We arrive at the hotel but then we are told to go to Hollywood and Orange. We try to get there but security will not let us through because we would have to walk in front of the red carpet entrance. So we walk back to the entrance of the hotel and finally security tells us how to get into the hotel via a back entrance. It took us nearly 45 minutes to arrive finally at our destination. It is an amazing sight. I see the podium decorated with two golden Oscars, and I know that in a few short hours some very lucky Hollywood actors will be beaming with pride.
3:06 p.m. Price Waterhouse Cooper executives have arrived at the red carpet carrying the ballots. They hold the secrets.
3:16 p.m. Regis Philbin is on the red carpet! He is hosting a pre-Oscars show for ABC and he is walking the press line.
3:19 p.m. The producer of the Oscars, Gil Cates is on carpet talking to reporters. He pauses briefly for photos but is ushered along.
3:27 p.m. George Clooney and girlfriend Sarah Larson have arrived on the red carpet. Larson is in a strapless white dress with pink beading.
3:28 p.m. Regis, of course, snags the first interview with Clooney.
3:30 p.m. Kristen Chenoweth who will be performing the Oscar nominated song “That’s how you know” from “Enchanted” has just graced the carpet. She is waving to fans in her black strapless dress. She is walking the carpet solo.
3:44 p.m. It is starting to rain a little bit and the temperature in Hollywood is hovering around 60. The red carpet is full but many are wearing jackets or shawls to stay warm.
3:49 p.m. Heidi Klum is ravishing in red. She has a red gown with a caplet. She is busy going from interview to interview. She is
accompanied by her husband, singer Seal.
3:59 p.m. John Travolta along with wife Kelly Preston have arrived. Preston is wearing a strapless orange dress.
4:11 p.m. Clooney and girlfriend Sarah Larson are still making the rounds on the red carpet which right now appears to be a sea of tuxedos.
4:13 p.m. A very pregnant Jessica Alba just arrived in a strapless plum gown. She has her hands in her dress’ pockets during an interview with MTV.
4:15 p.m. Dwayne “The Rock” Johnson has arrived and stands a full head taller than many around him.
4:18 p.m. Anne Hathaway is making her way down the red carpet. She is wearing a one shouldered red dress with flower detailing.
4:28 p.m. Jennifer Garner, who has been in Boston all week filming, has made the cross country trek to attend the Oscars. She is wearing a strapless black dress with a stunning diamond necklace.
4:34 p.m. Javier Bardem has arrived. Hallie is gushing next to me. In a nod to the untraditional, he is sporting a black suit and tie, not a tuxedo.
4:42 p.m. Funnyman Steve Carrel and his wife arrived at the red
carpet. His wife is wearing a white dress.
4:43 p.m. “Grey’s Anatomy” and “Enchanted” star Patrick Dempsey has arrived on the red carpet with his wife. He looks very handsome in his tux. His wife is ravishing in a red strapless gown and wavy hair.
4:44 p.m. Oscar winner Jennifer Hudson just showed up in a white halter that has a stunning beaded neckline. Two time Oscar winner Hilary Swank is wearing a dress very similar to Anne Hathaway’s but Swank’s is in black.
4:46 p.m. Miley Cyrus looking older than her 15 years in a red gown and mature updo. She has trouble walking from photographer to photographer in her long dress. Instead she shimmies.
4:49 p.m. Laura Linney is in a beautiful plum strapless gown. Her hair is simple yet elegant.
4:53 p.m. Saoirse Ronan, a Supporting Actress nominee for her role in “Atonement,” arrives in an emerald green dress that is age
appropriate for her 13 years.
4:56 p.m. Faye Dunaway catches up with actress Kerri Russell and her husband Shane Deary.
4:58 p.m. Colin Farrell and his mother have arrived. When we were at Jay Leno’s show on Friday, Farrell explained how is mother was picking up over $350,000 worth of diamonds to wear to this event.
4:59 p.m. Regis Philbin has begun the ABC pre-show.
By Madeira Ginley