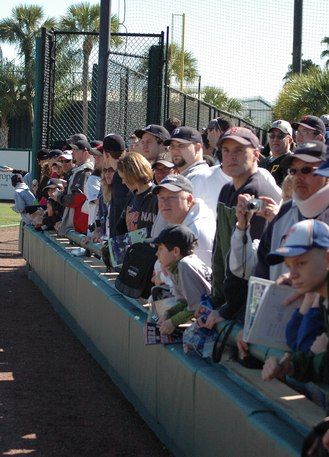 During the fist few days of our spring training coverage, it’s easy to notice attitude distinctions between players: they avoid the media and sometimes their fans or they’re open and willing to interact with everyone. In a career where the limelight is part of the package, why are players so divided?
One of our crews was covering a hot team. They were in a section of the park that was closed off to most fans. A young girl and boy were standing in the in a private section by the field waiting for players to sign their merchandise. Their faces lit up as two prominent players (that we would even love to have autographs from) walked past. The kids called to the players but were shut out. It was as if the players didn’t even notice they were there. And if they did respond, it was to give a poor excuse. And how could they not notice two cute, expectant faces calling out to players that were clearly their idols.
My crew also noticed a lack of charm with certain players. Some were rude to the media, while others ignored the crowds of fans dying for autographs or just a friendly wave and smile. I understand if you need to work out and don’t have time. But when you’re done warming up and are waiting for the game, show some appreciation. It’s a shame that many players don’t seem to have the time of day for their fans. Without the fans, players wouldn’t have the opportunity to play major league ball.
I can’t be too harsh though. Other prominent players far exceeded my expectations. One in particular was surprisingly humble. He made time to talk to any media, regardless of their affiliation, even if it was a quick word. On the same team, the manager even made time to sign a few balls and chat with fans who met him with applause.
Spring training isn’t the regular season. That’s why it’s so great for fans, they gain better access to players (and even plan vacations around them). And shouldn’t players love the extra attention? It isn’t every sport where fans are willing to eat, sleep, and breathe your season before it even begins.
-Gina Petruccelli, Florida Spring Training 2008