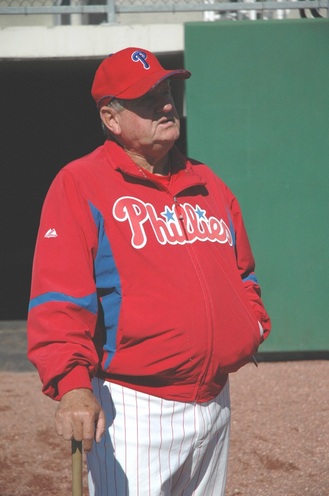 On Sunday, a crew of three (myself included) traveled to Clearwater, Florida to cover the Blue Jays-Phillies spring training game. We were able to interview Phillies 2B Chase Utley, Phillies Manager Charlie Manuel, and professional golfer John Daly.
But the one moment that stood out above the rest, at least for me, was an off-camera conversation I had with a member of the Phillies’ coaching staff.
The man is in his mid 60’s now, having been in the game for over 40 years now, four of which taking place in Boston, where he managed the Red Sox from 1997-2001.
Jimy Williams was hitting fungoes – better know as fielding practice – to the Phillies’ infielders before making his way back to the batting cages underneath the leftfield stands.
I hoped to get an interview with him, but Jimy is famous for not giving interviews, especially to any media member, be they a college student or not, from Boston.
I said hello to him, we exchanged a few words, and then he and I proceeded to have one of the coolest conversations I’ve had in my entire life. For anybody who watched or cared about the Red Sox back in the late 90s, my extended five-page “blog” about our exchange is a must read.
He told me anecdotes about Pedro Martinez, provided me with his thoughts on Nomar Garciaparra and shared with me a wide variety of stories about his former team and some of their biggest games from the 1999 season.
-John Pratt, CLEARWATER