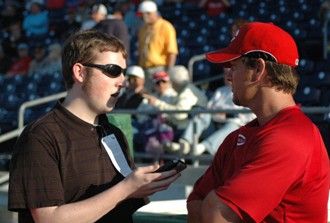 Maybe I’m slightly partial to Scott Hatteberg, maybe not. You be the judge.

After one glorious summer day at the ballpark, my grandparents took my outside the park to try to get autographs outside the players parking lot. Little did I realize, trying to get an autograph meant sticking my arm underneath the giant chain link fence, which was covered up by a green tarp, and hoping that a player would stop to sign my baseball amidst a lineup of scrawny arms grasping Red Sox paraphernalia.

After about half an hour of holding the baseball in my hand with my head lying on the pavement and cheering for ink, I felt the weight, the burden leave my hand. The baseball of my affection returned to my hands with new meaning and a new respect for the signer, Scott Hatteberg.

Over the next few years, my autograph collection grew and the ball’s meaning decreased. Among other signers were Wendell Kim, Darren Lewis, Wilton Veras, and Wally the Green Monster. Nobody says you have to be famous to sign a baseball. But that first signature meant something,

I’m older now and wiser, debatably. As I stood outside the visitors’ dugout at Jack Russell Stadium, I looked at the roster of Cincinnati Reds players in attendance, or lack thereof. It was apparent that I’d have to settle for not-so-household names. There were no Dunns, no Griffeys, not even an Encarnacion.

But there was a Hatteberg,

I saw him standing out at first base during Reds batting practice. Just standing, which amounts to about 90% of batting practice anyway. As the players jogged in to the clubhouse, I stopped and asked if he had a minute to speak with us.

At the time, I was exhausted, dehydrated, and about as physically reliable as Grant Hill’s knees. I even left the microphone in the camera well.

Despite the sore throat and light-headedness, the interview went flawlessly. And, really, why wouldn’t it? After all, Scott and I had grown up together. Sure, we shared only a brief moment and never shared words or eye contact, but we both grew up in that same uniform.

I looked at this man whose time with the Red Sox was unspectacular and realized just what he’d missed out on. He only briefly had the privilege of catching for Pedro Martinez, but he never really experienced the glory. He never had a seat on the duck boats, never experienced Red Sox Nation in the days when it required a membership card, and would be offended if we was called an “idiot”.

He’s older now and wiser, undoubtedly. Now a first baseman, he’s looking to latch on to a different shade of red. The truth is, he’ll never be a superstar in any color. His number won’t be retired and he won’t make baseball’s most revered writers and players tear up at a Baseball Hall of Fame induction speech.

But he got to play the game. In those 13 seasons playing whatever position he did in whatever uniform he wore, he made his living between lines of chalk. His work attire called for a leather glove and a baseball cap.

Those hands had experienced a wealth of pain and triumph. When that ink hit that rawhide, that was a man writing a story about his experience playing a game a 12 year-old kid could only dream of.

That’s what that ball meant.

As we concluded our interview, I shook his hand. Then he jogged into the clubhouse.