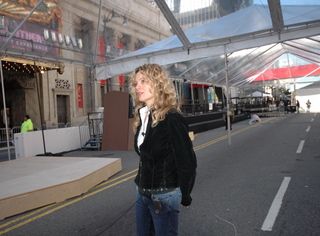 By Johnny Russo
February 18, 2009
As members of the academy cast their votes on who should walk away with Oscars, Dina Michelle is solving logistical puzzles. Michelle is the host committee coordinator of the 81st Academy Awards. That means she coordinates the publicists and talent for the red carpet, backstage area and Governor’s ball.
It is Michelle’s 5th year as host coordinator for the largest award show on the planet. In January she starts preparing and strategizing for the Oscars and finishes her work after the last person leaves the official Academy Awards after-party, the famed Governor’s ball located inside the Kodak Theater. It might seem like a short period of time to coordinate all the nominees, presenters and performers but it is a job with long hours and early morning wake up calls. Michelle has to pay special attention to detail. A lot of people work on the committee alongside her interacting with talent on a day-to-day basis.
In past years, Michelle worked with media outlets to get them stories and scoops on red carpet and Oscar buzz. In her long tenure with the Oscars, the economy has soared at times while sank at others but during this latest economic crisis Michelle said, “The entertainment business is still thriving.”
On the topic of the importance of publicists and agents, Michelle’s stance with each passing year has stayed the same, “There will always be a need for publicists and agents. The publicists are the image makers.” On Oscars Sunday, she will make sure all celebrities have the proper escorts to get them to where they need to be. When the festivities begin, fans are in the stands and viewers watching the big show on television at home will be looking for their favorite actor like Brad Pitt or Mickey Rourke, Michelle says her publicists and escorts will be her talent for the night.