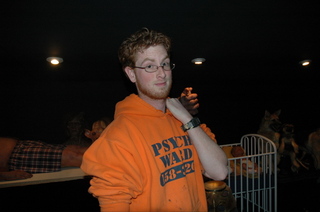 By Shannon Joy Donahue
Today we took visit inside the magical set of special effects. Emerson Alum
Matt Corrigan was generous enough to let us not only inside his workshop, but
also inside the mind of a special effects creator. Matt has worked on several films over the years. Those most memorable include “I am Legend” and “300.” I was
completely blown away by what stared at me as I walked into his “office.”
It was so surreal to see creatures and monsters that have scared me and given me
nightmares on the screen stare at me point blank. I was completely apprehensive
at first, but after touching these lifeless beasts and realizing yes, they are
not really alive and ferocious, I grew to be excited. I was so amazed
at the amount of time and energy it takes to build these special effects that
make a movie. I came face to face with dead bodies, severed limbs, fake horses,
babies, and even blood. It was also brought to my attention that most of the
ingredients found in fake blood are edible, disgusting? The answer is clearly
yes! Having the opportunity to see some of these props that appear in movies
and television shows was incredible, but where do they come from? Well, Matt
took us downstairs where the creative geniuses flourish, and the blueprints
become realities. I saw everything an artist needs to create these cinematic
masterpieces like plaster molds to silicone ears, and so much more. It appeared
I had entered an elf’s workshop, but instead of presents, special effects are
dreamt and created. I had such a wonderful time learning about the business of
special effects and the process and energy required by everyone who is
involved in creating a project. I have gained a fonder appreciation for this
aspect of the movie industry, I learned some valuable information on how to spot what is real in a movie and what is a special effect.
But that’s a tip I intend to keep secret for a while!