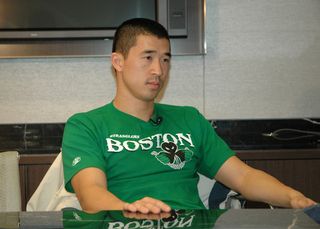 By Cat Oppenhimer
February 18, 2009
Upon pulling into the horseshoe entrance outside of the Creative Arts Agency in Hollywood early this afternoon, we found ourselves surrounded by Bentleys, Blackberrys, and the big wigs of Hollywood. The CAA is serious business, and maybe it was just me…but I felt mildly jolted by the whole scene.
It goes without saying, then, that I was nothing short of relieved when we met refreshingly humble and down to earth screenwriter Alex Tse. You may not know his name right now, but in this town Tse has earned himself “next big thing” status after successfully adapting the world’s most celebrated graphic novel, Watchmen, into a screenplay.
But you surely know that Tse’s screenplay was made into a film of the same name, set for release on March 6th. It is one of the most highly anticipated releases of the spring. But Watchmen the film has been in “development hell” since the novel was published back in 1986. Author Alan Moore changed the face of the graphic novel with Watchmen, and it looks like Tse and director Zach Snyder are about to do the same for the superhero flick…a genre that has become an increasing presence in theaters since Spiderman and Kirstin Dunst had their unforgettable upside-down kiss.
Showing some love for our homebase, Tse sat across from me wearing a bright green Boston t-shirt (Tse is also an Emerson College alum).
He defended the perfect timing of Watchmen’s release, although it has been a long and arduous process getting to this point. “The film asks the audience some questions…namely, how far would you go for justice? You know? If I could guarantee you world peace but 9 million people had to die in order for that to happen…do you think it’s worth it?”
This concept is one of the main premises of the film, and something tells me that I don’t need to state blatantly to you the real life circumstances that it parallels. The film takes place in the modern day United States in which a team of superhero vigilantes must fight to change to course of history and save humanity.
If you’ve seen the trailer, or, better yet, read the novel, you know that a one sentence summary simply cannot capture just how epic, captivating, and eerily timely Watchmen is…you’ll just have to see the film. In the words of Tse, or at least those that he wrote inside of my copy of the novel, “the movie doesn’t suck.” Now if that doesn’t sell it to you then I don’t know what will.