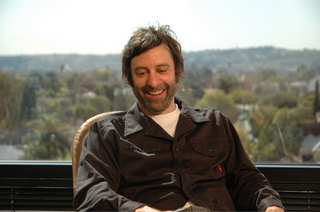 By Shannon Joy Donahue
February 19, 2009
A comedian represents the comedians. Publicist Matt Labov could not have asked for a more suitable job in Hollywood. In 1990 Labov graduated from Emerson College as a broadcast journalism major. Little did he know, that publicists and agencies would become his life, and reporting the news would be a thing of the past. He said, “I didn’t aspire to be a publicist as a kid. I didn’t even know what that was, until I got out of college. But for me, it was just kind of focusing on spending time at what I was good at.”
Over the years the California native has represented a number of stars. Those most notable include comedic actors such as Will Ferrell and Sacha Baron Cohen. Labov said he has created good relationships with comedians and represents them well because he cuts to the chase and offers the stars legitimate reasons why they should or should not do things. Also, Labov openly admitted that he is more comfortable working with and representing male comedians and stars. He has said that over the years and through trial and error, he is just not that good at representing the female side of stardom.
Labov also addressed the issue of trust within the industry. He said that eggs get broken every day in his business. However, regardless of how the industry is portrayed on television, the business is not as cutthroat as it may appear. In general, this Hollywood publicist loves his job, because no two days are ever alike. He currently represents about twenty clients and considers every day to be a new adventure within the industry.