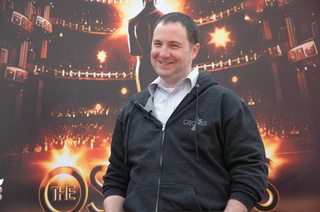 By Christina Barkhorn
February 20, 2009
He was a BFA Musical Theatre major at Emerson College, but now Joe Celli is the Art Director for the 81st Annual Academy Awards. He has been so successful that last year he won an Emmy for his Oscars show set design.
Once Celli realized that he could not stand to be rejected daily at auditions, he moved to LA to pursue a job in the entertainment world’s business side. For the past six years he has designed the sets for the Academy Awards.
Celli works with the designer of the Kodak Theatre David Rockwell to help Rockwell’s vision come true. Celli takes sketches and turns them into mechanical drawings. For the past three weeks Celli has been working from 8 am until midnight overseeing the Oscars set construction and installation in the theatre.
This year there is a whole new team of producers, directors and designers. “New people means they need to be taught how the show works and also help them find a way to make a stamp on the show,” said Celli. The show has been rethought and there is a more of a flow than in the past. This year it will be more than just people winning awards. It will a story telling how movies are made. That means there will be more of a sequence.
Although Celli said that he has not seen that many changes in the industry, times are getting tough for everybody due to the economy. “We are starting to feel that. A lot of scene shops that build our scenery are more eager to take work.”
However, the economy is not slowing Celli down. Hopefully his the 81st Academy Awards set is destined to be up for another Emmy.