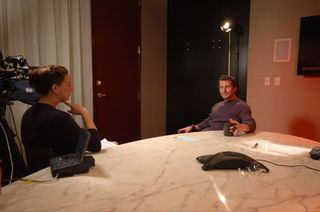 By Shannon Donahue
February 20, 2009
Today I had the chance to interview Executive Producer Aaron Ryder. Ryder is most notable for his work on several movies such as “Memento,” “The Mexican,” “Donnie Darko,” and “The Prestige.” Needless to say, I was fairly nervous having the opportunity not only to meet but also interview this highly successful motion picture producer.
Before the interview began, and also briefly during the set-up, I just kept repeating to myself the questions I had prepared, and I also went back and forth inside my mind for the possibility for certain questions to make or break this interview, and ways that I could fix things if that indeed occurred.
So, as the time drew nearer for the interview to begin, I took a deep breath and decided to jump right into the zone of journalism. As soon as Ryder walked into the room, I instantly became excited to interview him. This was going to be awesome and also such an incredible opportunity to interview a man of his caliber.
The interview began, and question after question, Ryder would remark, “That’s a great question.” I know it seems silly, but hearing that you have come up with decent questions that interviewee enjoys answering, is such a rewarding feeling.
Ryder spoke about his career within the business, and he basically encouraged everyone trying to make it in the business to just take a risk. That is tremendous advice to give to anyone these days. Times are rough, and as many of us move into the next phase of our lives, we have to be willing to take a risk with reality of potentially failing. This is not a terrible concept to learn now, because if we are afraid to take a risk, we may never know what outcome we could have had.
Ryder had such a down to earth personality. Throughout the interview he remained so humble about his success within the business. His passion and dedication for the film industry was so refreshing to witness. I wish him the best in his future endeavors and look forward to viewing more of his work.