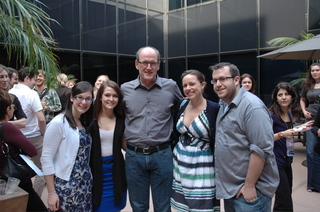 By Christina Barkhorn
February 20,2009
I wasn’t sure what to expect interviewing Overture Films CEO Chris McGurk but I definitely got a lot more than expected.
After we set up our equipment we were told by McGurk’s publicist that there was going to be a surprise for the entire company and that if we had time, it would be worth it to stay. Little did I know that I was going to be meeting Academy Award nominee Richard Jenkins.
I was surprised to learn that McGurk’s major in college was finance. But it just goes to show that it doesn’t matter where you start, if you have a passion for something that dream can come true. McGurk said he had always had a passion for the movies and now he is the CEO of his own production company. He started it two years ago and it is now frequently called within the company the “little studio that could.”
After the interview, we were ushered outside to a courtyard filled with Overture Film employees. They were all as surprised as I was to find that Richard Jenkins….the Academy Award Nominee for Best Actor in “The Visitor” ……was there to speak to everyone and thank them for their hard work on the movie. I recognized Jenkins from “Step Brothers,” “Cheaper By the Dozen,” and “Six Feet Under.” I surprisingly wasn’t star struck and was in awe at how humble and appreciative he was of everyone working at Overture.
Between meeting the CEO of a film production company and an Academy Award nominee, I had a day that I will never forget. If there is one thing I have learned, it is that hard work and persistence definitely will pay off in the end. “The Visitor” might not be as well known as some of the other movies out there, but it made a statement, just like I plan on doing!