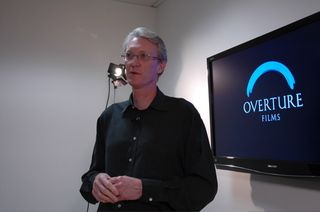 By Anna Scheer
February 20, 2009
One may think a successful CEO always wears a suit, but Chris McGurk proved that assumption false. McGurk, casually dressed in denim in the workplace, is the CEO of Overture Films and Anchor Bay Entertainment. With a passion for films, he climbed his way to the head of a company which now has an Oscar nomination.
McGurk believes that Overture Films gives small independent films the chance they deserve to become widespread. But Overture Films does not seem like a small-time business. It hs been involved with films like “Righteous Kill,” starring Robert DeNiro and Al Pacino, and “Last Chance Harvey,” starring Emma Thompson and Dustin Hoffman. But its current hit and independently made piece is “The Visitor” and it has proven to be the biggest surprise.
Two years ago McGurk picked up the film at the Toronto Film Festival. Now the small project he took a chance on has an Oscar nomination for Best Male Actor. The name Richard Jenkins may not pop out, but chances are you have seen his face. He has had parts in several films including “Step Brothers,” “The Kingdom,” and “Rumor Has It.” Sunday he will be up against A-listers like Brad Pitt and Sean Penn for the coveted Best Actor Oscar.
The credit for success goes to McGurk for choosing to release the indie flick. Although with his modest attitude McGurk probably would pass the credit to someone else he believes is more deserving. But the fact is that McGurk’s experience in the film industry and passion for a good movie has trained his eyes for spotting gold and letting it shine.