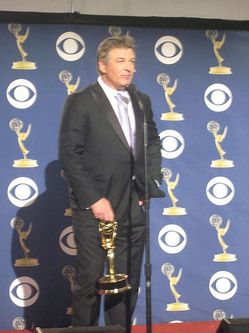 By Jillian Leff
September 21, 2009
Once the stars cleared out, the deadline, or pressroom was the place to be. This room is where reporters gather from all around the world to interview the winners from the night. Highlights from the deadline room included Emmy winner Jon Cryer telling us about how he picked his outfit by ripping a picture from a magazine.
Alec Baldwin, winner for Best Actor in a Comedy, held his Emmy by the wire ball on top of the statue, and swung it back and forth. Finally, the cast of “Mad Men,” Winner for Best Dramatic Series admitted that they would be drinking to celebrate just as much as their characters do on the show.
Once the last batch of winners made it through the room, the night was nearly over. The stars made their way to those infamous after parties to celebrate all their hard work. The Emmy Experience for 2009 was full of surprises, unbearably hot weather, glamour, and the television shows that bring us together to make it all happen.
Photo credit: Kimberly Richards.