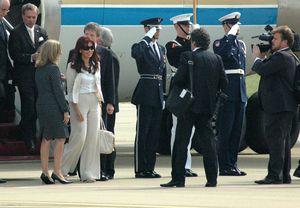 By Kailani Koenig-Muenster
September 24, 2009
As foreign dignitaries touched down at Pittsburgh International Airport, they were greeted with foggy skies and international military brigades.
Wednesday evening, the leaders of Saudi Arabia and Indonesia were the first major diplomats to arrive for the G20 Summit.
Then just after 10:20 am on Thursday, European Commission President Jose Manuel Barosso landed in a private jet. He was immediately escorted away in a motorcade.
Following his arrival were the leaders of Brazil, India, Argentina, Russia, China, Thailand, Germany, Italy, Mexico, and Canada. One by one, each plane pulled up to a sea of greeters, cameras, and security. Most leaders arrived with their spouses and an extended entourage that quickly piled into their limousines. A total of 16 planes carrying foreign dignitaries touched down on Thursday alone.
While some were stepping off of their planes after a long flight from their home countries, others had a much shorter ride, coming directly from the United Nations conference in New York City.
National and international media were lined up on the tarmac to catch a glimpse of every visiting G20 dignitary as they stepped off their plane.
President Obama was one of the last to arrive. Air Force one touched down in Pittsburgh around 3:30 p.m on Thursday.
Argentine President Cristina Fernández de Kirchner is greeted after arriving in Pittsburgh for the G20 Summit. Photo credit: Laura Imkamp, WEBN News.