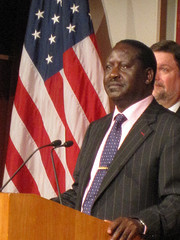 By Mumbi-Michelle Kimani — 9/24/09
Kenya’s Prime Minister Raila Amolo Odinga believes Africa’s problems can be resolved through the continent’s people and their hard work. He spoke Thursday night to an audience at the John F. Kennedy School of Politics at Harvard University in Cambridge, MA about his vision of Making Democracy Work in Africa.
In his speech, the Prime Minister highlighted that African problems can be resolved because “Africa is the richest continent in terms of resources.” Yet despite that richness, the Prime Minister blamed mismanagement of resources as the reason why Africa has not reached its full potential. “African generations of today have to pay for debts which were incurred by those corrupt leaders,” he said.
The Prime Minister insisted that it is the African people and not foreign aid that will develop Africa. “We need to now look at what we can do for ourselves, investment is the most important, secondly trade,” he said.
The Prime Minister believes that what he used as his main campaign message is the solution to Kenya’s problems. The first solution is “number one infrastructure, number two infrastructure, number three infrastructure. I have no reason to doubt or change my mind,” he said.
The Prime Minister said that Kenya was developing and had invested heavily in road, railway and IT infrastructure to bring about greater development and democracy.
It is yet to be seen whether Kenya is a good example of democracy at work in Africa. The U.S. Ambassador to Kenya Michael Ranneberger has announced that 15 prominent Kenyan officials have received letters warning them against blocking reforms.
These reforms include enactment of a new constitution, judicial, police, electoral and land reforms tackling youth unemployment, tackling poverty, inequity and addressing impunity, transparency and accountability.
When asked to respond to Ranneberger’s reforms announcement the Kenyan Prime Minsiter responded by saying, “the U.S. government is totally entitled to do whatever they want to do, if they are convinced that the people they are banning from coming to the United States have been involved in forms of impropriety.”