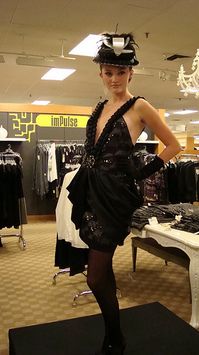 By Brittany Berkowitz
September 29, 2009
It could have been Paris or New York but it was actually downtown Boston. Tuesday night the city welcomed five fresh faces to fashion. Fashion Group International of Boston hosted a runway show at Macy”s Downtown Crossing store as part of Boston Fashion Week.
Designer Millie Bautista displayed a collection inspired by the 1940s. It was a line reflective of feminism. The 24-year-old designer immigrated to the United States from the Dominican Republic at the age of five and is a graduate of the Massachusetts College of Art and Design.
Pavlina Gilson’s line “PRIEMLOV” was much inspired by her homeland, the Czech Republic. She also graduated from the Massachusetts College of Art and Design. Gilson was the award recipient for the “All School Show Award for Fashion Design” and the “Jean Shohan Award for Design.” She has participated in “The Art of Fashion” exhibit in Natick and “Consutura,” a fashion exhibition in Boston.
Originally from South Brazil, Nara Paz attended school in the United States to learn how to sew and make patterns. Paz is fond of collections that have themes, which is why her line called”Pieces of Me” is modeled after the Renaissance. Paz attended Lasell College in Newton, Massachusetts and earned her B.A. degree in fashion design and production.
Eddi Phillips is from Southbridge, Massachusetts. Previously he was previously an accountant before he decided to pursue fashion. The 43-year-old designer concentrates his collection on cocktail dresses and eveningwear.
Twenty-three year old Elena Sanders displayed clothes designed during her senior year at Mount Ida College. Her line is inspired by the “steam punk” movement which is clothing made from metal and even household appliances to enforce an industrial look.
These five new designers’ fashions are being displayed in Macy’s windows in Downtown Crossing.
See our Flickr page for a complete slideshow of Fashion Week photos.
Photo © WEBN News 2009.