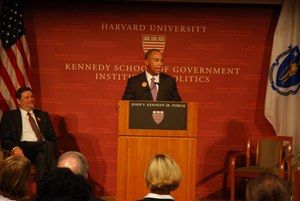 By Mumbi-Michelle Kimani — 10/22/09
Massachusetts Governor Deval Patrick is still committed to public service no matter what he has faced in office.
That is what the Governor told an audience Thursday night at Harvard University’s Kennedy School of Government. His speech was titled “Inspiring Public Service” and that is what he tried to do.
The Governor said although he had anticipated challenges he did not expect them to be so profound. ” I knew that resources would be tight but I did not expect a global economic collapse,” he said.
Governor Patrick said the economic recession is not his only obstacle “I did not anticipate that we would sometimes have hand to hand combat with members of my own party.”
However Patrick went on to warn against accusations and blame because the Commonwealth’s problems are too great. Instead he encouraged everyone to be those who identify problems and find solutions.
In spite of the challenges Massachusetts has “closed an 8 billion dollar budget gap,” said Governor Patrick amid applause. He also cited that his administration has invested in health care and information technology industries which according to experts are leading to Massachusetts’ economic recovery.
The Governor recognized that despite his administration successes there is still more to be done. He said in order to overcome the challenges facing Massachusetts the community must take responsibility.
He added that the responsibility of public service does not fall solely on the government. Governor Patrick highlighted the different forms of services ranging from military to non-profit where individuals can serve.
“Everybody can serve…we are all in this together for better or for worse,” said Governor Patrick. “It takes courage and character in our modern culture to see beyond our own interest and to recognize the need in someone else’s life and then to take action to try and make a difference.”
The Governor stressed that the victims of domestic violence or children in a crowded classroom don’t care about politics and financial markets which is why “service to the greater good is more important than ever.”
He was optimistic, saying that public service could heal the current economic crisis “Maybe public service will drive us to a spiritual recovery as well as an economic one.”