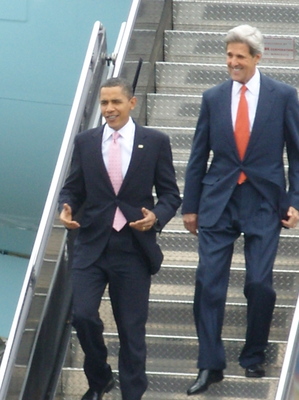 By Julianne McDonald –10/23/09
President Barack Obama flew into Boston on Air Force One this morning. Massachusetts Senator John Kerry traveled on the plane with him from Washington, DC. President Barack Obama was in town to give a speech about smart energy at MIT and to campaign for Governor Deval Patrick.
The President and Senator Kerry were met at Logan Airport by Governor Deval Patrick and Boston Mayor Tom Menino. Areas of the city were temporarily shut down while the presidential motorcade moved through both Cambridge and Boston.
After his speech at MIT, President Obama then attended a fundraising event at the Westin Copley Hotel for his friend, Governor Patrick, who is facing re-election and struggling with low approval ratings. There were demonstrators outside the hotel demanding that President Obama fulfill his campaign promise to end the military’s Don’t Ask, Don’t Tell policy and to sign a health care reform bill.
From Boston, the President headed to Connecticut, where he would also be campaigning for Senator Chris Dodd. Then he was flying back to Washington, DC.