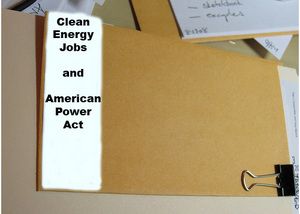 By Andres Acosta — 11/02/09
A bill to put a price on carbon usage and create jobs has hit the Senate floor. It is called the Clean Energy Jobs and American Power Act. California Senator Barbara Boxer is the Chair of the Environment and Public Works Committee. She recently hosted a legislative mark up in order to gain Republican support. But there was a problem, only one Republican showed up… Ohio Senator George Voinovich. He represented his party by saying the bill’s analysis was not detailed enough and the Environmental Protection Agency’s predictions were not realistic. Although David McIntosh of the EPA was there to answer questions about the bill, Senator Voinovich left the mark up early.