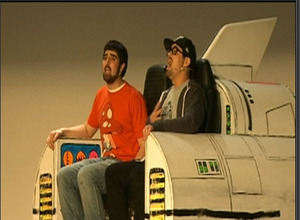 By Kayla Harrity — 2/15/10
Space ships, dancing goats, and aliens… this is not your typical musical. “Intergalactic Transfer Students” is a hip-hopera show that challenges the boundaries of musical theater. A hip-hopera fuses hip-hop and opera together in a musical show with lights and dancing.
Producer and star Eric Baker commented on his experience working on the show, saying, “I’ve never done a show like this. I don’t know if anyone has done a show like this. It’s kind of a new genre or new experience.”
Stars William Kowall and Eric Baker have been rapping together on the Boston Common for years. Since they were little, Kowall and Baker were involved in the arts. They came together to mix their musical backgrounds in a hip-hopera that takes place in space. Kowall described the hip-hopera as “same stories we can have on earth, but all over the galaxy.”
Baker thinks that hip-hoperas will start to become mainstream musical outlets for artists. “I don’t feel like hip-hop is leaving, I feel like it’s a great art form, but what are you going to do to hip-hop? Add a storyline,” said Baker.
The words hip-hop and opera sound contradicting, but “Intergalactic Transfer Students” really takes you to the next galaxy.