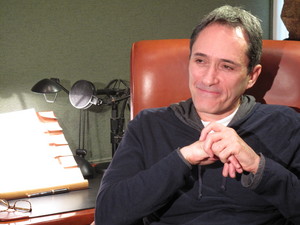 By Johnny Russo— 03/06/10
You hear his voice all the time. You hear his voice on television commercials, television spots and movie trailers.
George Del Hoyo is a voice-over specialist. He has been the voice for over five hundred feature film trailers and hundreds of thousands of television and radio spots. You can hear Del Hoyo’s voice on popular Fox shows such as “American Idol” and “Glee.” Literally Del Hoyo’s voice has been heard around the globe.
Del Hoyo works out of his California house in an office set up with a microphone, a preamp, and a ISDN system. “With those three things I can communicate not just communicate but send my voice any way on earth.” It allows him to stay home and not have to travel from site to site which can takes its toll.
Although Del Hoyo’s voice has been filling movie theatres and coming into homes via a television screen for years, this was not his first career choice. “It was the last thing on my mind.” Del Hoyo was an actor before he moved behind a microphone. Del Hoyo stared in television shows such as “Home Improvement,” and “Beverly Hills 90210.”
Now Del Hoyo has moved away from acting and makes a living solely with his voice. He gets emails from around the world asking him to read into a microphone. Even though his office is just down the stairs from his living room, Del Hoyo works a pretty long day. “I start working at 11am and end up around 7pm. What starts off as three or four can end up being ten or twelve of fifteen jobs a day.”
Del Hoyo feels like he is a composer and a storyteller when he is tracking his pieces. He moves a lot with any given script. “I feel like I am orchestrating. I am literally conducting the whole thing. My arms move to emphasize words. I see them coming. I visualize them and I hear them.” Del Hoyo used to stand up when he would talk into the microphone, but now he is comfortable doing his job in a chair.
He commonly calls himself the master of the short form. Del Hoyo says there is a difference between a voice over for feature films and television spots. “A feature film I do more of a narrative. It has the luxury of time you can breath a little more and take more time with storytelling. With television you are jammed into this is a 30 second spot.”
Del Hoyo ended with explaining the biggest misperception of voice over specialists is thinking that anyone can do it. But it is not so. “It is a skill set that you have to learn and acquire and work at, practice and perfect.” Del Hoyo does not plan on stopping anytime soon. So the next time you are in a movie theatre and you hear the phrase “In a world….” The man behind that voice is probably George Del Hoyo.