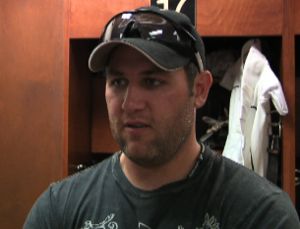 By Evan Anderholm – 3/11/2010
As players get older and their contracts begin to end, they must prove themselves to their team in order to earn another contract. For Houston Astros’ first baseman Lance Berkman this is his exact scenario. He is entering his twelfth season with the Astros. The organization has the option to keep him next year for an already agreed upon amount of $15 million, or allow him to test the free agency waters.
Berkman is in a contract year and 36 years old. So even though he has spent his entire career with Houston and became a cornerstone of the team, he must prove himself. However, Berkman is not allowing the pressures of a contract year get into his head.
“I’ve played long enough to know that kind of thing is counter-productive. If you start thinking about something or worrying about it, you’re not going to end up being any good. All I can do is go out there and prepare as well as I can, and when I step on the field, give it my best effort, focus and concentrate and see what happens at the end of the year,” said Berkman.
Berkman is a native of Waco, Texas and he has played his entire career in the Lone Star State from high school days, through college and now the major leagues. This is the fourth season that Astros teammate and outfielder Hunter Pence will play with Berkman and he knows how well the first baseman fits into the Astros’ system.
“Being from Texas, he’s a good fit for Houston and we love having him,” said Pence.
Last year, Berkman had 25 home runs, 80 runs batted in and .274 batting average In the three prior seasons, he averaged 11 more home runs, 34 more runs batted in and over 25 more points in average. Astros fans are not used to seeing these numbers from Berkman.
The bottom line is that Berkman’s age and health are issues of concern. Berkman is battling a bruised knee in addition to the decline in numbers. But because the team owners need to give him big money if they want him to stay, he needs to perform well.
And this is what Berkman plans to do, ” I know if I have a good year they’ll pick my option up and if I don’t then they probably won’t.”
In his career, Berkman has allotted over 33 hundred home runs and around .300 batting average, proving to be one of the Astros biggest offensive threats for the past decade and one who can attack from both sides of the plate as a switch-hitter.
Astros first year manager Brad Mills knows the leadership Berkman has both on and off the field and hopes the five-time all-star can again bring his “A” game and get himself back in Houston for the upcoming years. “Anytime you have a veteran guy you hope he’s able to put up some of the numbers he’s done in the past and I’m sure there’s no reason why he won’t be able to do that,” said Mills.
Berkman cherishes the time he has spent in Houston. He knows at the end of the season a decision will be made and if he does go elsewhere, he is comfortable with his legacy with the Astros.
“I feel pretty good about it. Obviously, being from Texas it’s a thrill to be able to play for one of my home state’s teams. Hopefully, I’ve been able to maximize my ability and so I feel like at the end of the day I’ll be satisfied wherever I end up,” Berkman said.