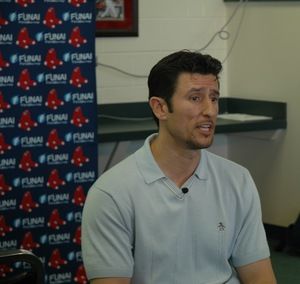 By Daniel Massar — 3/10/2010
Nomar Garciaparra said goodbye to Major League Baseball with the same team he had said hello, the Boston Red Sox.
“I’ve always had a recurring dream, to be able to retire in a Red Sox uniform. Today I get to fulfill that dream and retire as a Red Sox,” said Garciaparra. He announced his retirement at City of Palms Park while sitting next to Red Sox President Larry Lucchino and General Manager Theo Epstein.
Tuesday Garciaparra signed a one-day minor league contract with the Red Sox and then immediately retired. The former All Star shortstop had spent parts of nine seasons in a Red Sox uniform. He became a New England sports icon and was one of the most beloved players to put on a Red Sox uniform.
“I’m getting choked up now. I’ve got the chills,” said an emotional Garciapparra. “To be able to have that dream come true, I really can’t put into words, because of what this organization has always meant to me, meant to my family.”
The Red Sox traded Garciaparra at the 2004 trade deadline to the Chicago Cubs. Boston went on a tear after the trade and went on to “break the curse” by winning the franchise’s first World Series since 1918. Garciaparra, on the other hand, never recaptured his Red Sox form with the three other teams for which he played, the Cubs, Dodgers and A’s.
It was fascinating seeing Garciaparra sitting next to the man who had shipped him out of town, Theo Epstein. Epstein talked about the trade, describing it as one of his toughest decisions as a GM.
“We’ve been fortunate to maintain a relationship over the years after the trade. I think both of us understood at the time that it wasn’t about Nomar and it wasn’t about me,” said Epstein. “Baseball trades happen. They are about what’s going on with the team at the time, and certain things that had to happen.”
Garciaparra will now be tackling a career as a baseball analyst for ESPN. This will keep him involved in the game. The retirement and the way he is going out as a member of the Red Sox bring up an interesting question. Will his #5 be retired at Fenway Park? When a reporter asked the question, Lucchino said that was a discussion for another day.
“He’s played an enormously important role to the history of the Red Sox and all of that is by way of saying your question will come up again down the road, but today is not the day to focus on that,” said Luchino. “Today is the day to focus on the pride that we feel and the respect we have for Nomar and his decision to retire as a member of the Boston Red Sox.”
Garciaparra retires with a batting average of .313 with 229 home runs and 936 RBIs. He is a six-time All Star, the 1997 AL Rookie of the Year, and 2006 NL Comeback Player of the Year. Those stats may just be enough to put Nomar’s #5 between Joe Cronin’s #4 and Johnny Pesky’s #6.