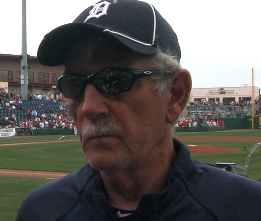 By Evan Anderholm – 3/12/2010
Sometimes the past is hard to forget. Just ask the Detroit Tigers.
Last season, the baseball world watched as they allowed the Minnesota Twins to steal a division title the Tigers had all but locked up. Now over four months later, the Tigers have reloaded and are back to battle in the tough AL Central.
Tigers’ manager Jim Leyland knows all the teams in the divisions are competitive and sees a lot of similarities among them. He thought, “I don’t think anyone of us are separated. We are all pretty good. It will be a dogfight like it was last year. I don’t think there’s any favorite or not favorite. There’s five teams in the division and they are all going to have their say in the race.”
One of the new guys attempting to right the ship is the 36 year old Johnny Damon. In February, he was picked up on a one year contract. Damon is confident in what the Tigers bring to the table. He believes that “They are a close team already. They missed the playoffs by a game last year. Hopefully, it can be different this year.”
During the offseason, Detroit also lost a few of its offensive weapons. Second baseman Placido Polanco went to free agency and was picked up by Philadelphia, and center fielder Curtis Granderson was traded to the New York Yankees. Young talent is expected to fill the voids this season.
At second base, rookie Scott Sizemore will attempt to fill the big shoes Polanco left. In four full years in Detroit, Polanco took home two gold glove awards and had a .307 batting average. Sizemore, however, is just focusing on his own game for now.
“I don’t think anyone expects me to be Polanco out there. I know those are my goals to try and reach that standard at some point, but I just got to be me and give it my all and with a little bit of work I can get there one day,” Sizemore said.
Austin Jackson was acquired in the Granderson trade. He will begin this year in center. Johnny Damon is confident in Jackson’s ability to be a force to be reckoned with this year.
“I feel like he’s been ready the past couple years. Unfortunately, there was a longjam in New York for him. Now, he’s got a chance to be an everyday started and the big leagues and I like what I see so far,” Damon said.
On the hill, Detroit has a great one-two punch with Cy Young Award contender Justin Verlander and Rick Porcello, who had a phenomenal rookie year posting a 14-9 record and a 3.96 earned run average. The Tigers have also tightened up their bullpen with the addition of closer Jose Valverde for a two-year deal. Valaverde adds an arm which has save 116 games over the last three seasons.
In the bullpen, Detroit also welcomes back set-up man Joel Zumaya, who has battled injuries over the past few seasons. This offseason, Zumaya commented on how he almost quit saying, “I almost gave up the game. I had family support me and give me the old boot in the behind and say, ‘Hey, go try it again. We got your support.’ I just went out there and worked hard everyday during the offseason. I came back and my arm is feeling 100 percent.”
The Tigers are confident in the group of guys brought together this year. Last year is behind them, and this year brings a new slate and another chance to get back to the World Series, which they reached back in 2006.
“We have a good team. The games are all decided out here. You’ve got 162 of them, It’s a long, long grind. The strong survive in this business, that’s just the way it is,” Leyland said.