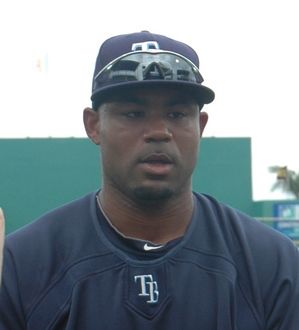 By Daniel Sardinha – 3/12/2010
Carl Crawford seems to be running his way to a big contract. The speedster is the longest tenured player on the team but if the Rays want to keep him in Tampa it is going to cost them. Crawford, 28, was drafted by the rays in the second round in 1999. He made his major league debut eight years ago in 2002. In the age of free agency it’s rare that a player is drafted and spends his entire career with the same team. If Crawford reaches a long term deal with the club he can do just that, and he understands that would be something special.
“Well that’s something that doesn’t happen to much so it would be nice if I could finish as a Ray and be one of those guys that stay with one team their whole career, you know it’s just nice to be one of those guys,” said Crawford
Not only would it be nice for Crawford but for the whole organization. If the Rays are going to make a serious run at another world series they will need him to be at his best. The left fielder is a rare player who you can lock in for at least 50 stolen bases, 12 homeruns, and a solid .290 average, not to mention great defense every night. His impact with the team goes far beyond numbers. Just asked the Rays talented centerfielder BJ Upton what Crawford has meant to his game.
“Its been great for me,” said Upton. “Originally when I went to centerfield I hadn’t played an inning out there so being able to have him next to me and watch some of the things he does out there has definitely helped me along the way and I’m going to continue to learn from him and apply it to my game.”
If there is anyone who can learn something from Crawford it is Upton. The twenty-five year old played his first season in 2007 and the one stat that has improved dramatically is stolen bases. Upton credits Crawford with helping him became a perennially base stealer.
“I try and watch everything he does on the bases,” said Upton. “I think he’s the best base stealer in the game. Anything I can take from him I do, just his jumps and him reading pitches and knowing times I’ve definitely picked up over the years from him.”
Former Major Leaguer Dave Roberts said Crawford could be the next player to steal one hundred bases. Crawford joked and said he’d give it a shot.
“That’s going to be pretty tough in today’s game but I’ll definitely try every year just to see if somebody can do it,” said Crawford.
He may not swipe one hundred bases but another all star year for Crawford could have the Rays stealing a playoff spot from the Red Sox or Yankees. With Crawford’s speed and a great nucleus, the Rays could find themselves back in the World Series for a chance at their first championship in franchise history.