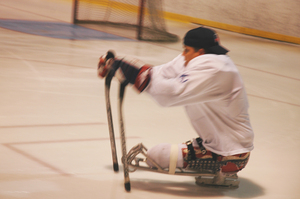 By Stephanie Greenland
Team USA has captured gold in Paralympic sled hockey. The U.S. did it by defeating Japan 2-0 in Vancouver yesterday.
Alexi Salamone drove the puck home despite heavy traffic in front of the net with 10:50 remaining in the first period. Taylor Lipsett added an insurance goal with 1:18 to go in the third. Joe Howard had assists on both goals and Lipsett had an assist on the goal by Salamone.
Goalie Steve Cash kept Japan from depositing the puck into the net, stopping every goal he faced in the game including a penalty shot by Japanese squad captain Takayuki Endo in the second period.
Team USA was the top seed heading in to the Paralympics and this is the second Paralympic gold medal for Team USA. The U.S. had won gold in 2002 and bronze in 2006. Canada was the fourth place finisher at these games. That country had won gold in Torino in 2006.
WEBN interviewed Joe Howard in December and asked him about winning gold in Salt Lake City in 2002.
Photo: Joe Howard practices at Connell Memorial Rink in Weymouth, MA. Photo by Pamela Zapata.