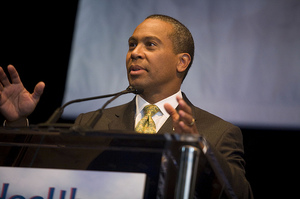 By Mumbi-Michelle Kimani — 09/25/10
Governor Deval Patrick took his campaign message of optimism and effort to supporters at a campaign rally in Titus Sparrow Park in Boston on Saturday. He criticized his opponents for taking advantage of people’s anxieties to get into office.
“Charlie Baker and Tim Cahill have the same strategy to take your anxiety, whip it up into anger and try to ride that into office,” said Patrick.
During last week’s debate Patrick’s gubernatorial opponents accused him of relying on 1 year fixes, failing to balance the budget and not creating new jobs for the 300,000 unemployed workers. But Patrick retaliated by saying his opponents fail to recognize any other success but their own.
“Charlie Baker and Tim Cahill have a tendency to belittle every achievement not their own and the fact is these guys have spent twice as much time on Beacon Hill as Tim Murray and me and achieved half as much as we have in the time we have.”
The Governor told the rally crowd that his administration has achieved a lot. He used recent statistics to praise Massachusetts for leading the recovery out of the recession, job creation, health care and education.
“Today, no other state in this country is creating jobs faster than Massachusetts and our economy is growing more than twice as fast as the rest of the country,” said Patrick.
To help continue this growth the Governor urged the people of the Commonwealth not to give into what he called his opponents’ negativity but instead to hope for the best and work towards it.
The Governor is hoping that his message will start working. The latest Rasmussen report shows he has slipped to 43%, Republican Baker has gained to 42 % and Independent Tim Cahill has dropped to 5%. Green-Rainbow party candidate Dr. Jill Stein is below even that.
In the coming days his campaign Governor Patrick plans to focus on hard work at the grassroots level and hopes to get President Obama to campaign in the Commonwealth for him.