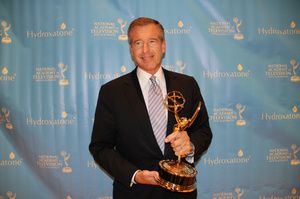 By Kayla Harrity and Brandon Penny — 09/28/10
Hollywood stars are used to the spotlight and attention they receive on the red carpet while journalists ask them questions about their careers. But these journalists deserve special recognition too. The 31st Annual News and Documentary Emmy Awards was a night for journalists to shine. It brought industry professionals together to celebrate excellence in broadcast journalism.
Monday night journalists arrived at Frederick P. Rose Hall, Home of Jazz at Lincoln Center in New York City to line the red carpet. Nominees were not only local, but also international. Whether this was their first or seventh nomination, they were proud and eager to share their stories. But some of the most popular and influential journalists, like Katie Couric and Brian Williams, were not present at the carpet. That is because they were busy bringing the day’s news to America. After all, the news never stops.
CBS took home the most Emmys with seven wins, four for “60 Minutes” and three for “CBS Evening News with Katie Couric.” NBC had six wins and PBS had five. Some of the most memorable awards of the night were won by Williams and Dan Rather. Williams won for “Outstanding Coverage of a Breaking News Story” for a report about theairplane landing “Miracle on the Hudson.” He also won for “Outstanding Continuing Coverage of a News Story” for “Unlikely Refugees.” Rather won “Outstanding Business and Economic Reporting in a News Magazine” for HDNet’s “Iran’s Manhattan Project.”
As the winners accepted their trophies, one thing was clear. No one knows what the future of journalism holds. But the Emmy winners remained optimistic about their changing industry.
“I think it’s never been better,” Jim Lehrer said. “There’s never been a time in our history when good, clean information has been more necessary than it is now. Journalism is a frantic fight now over how to do it and the resources to get it done, but we’re a democratic society. Democratic societies don’t work without information. That’s the business we’re in. There’s gonna be some bumps, but we’re gonna get there.”
Dan Rather, Jim Lehrer and Paula Zahn on Future of Journalism