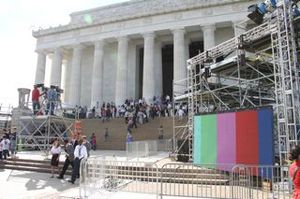 By Brandon Penny — 10/01/2010
Saturday people from across the country will gather together for a march on Washington, D.C. The One Nation Working Together (ONWT) rally is set to take place at Lincoln Memorial from 12 – 4p.m. It is estimated that up to 200,000 people will attend. The rally’s motto is “For Jobs, Justice and Education for All.” The ONWT campaign has partnered with more than 400 organizations nationwide.
Before the rally actually begins there will be an Interfaith Service from 11 am – 12 pm. The rally program will be split into eight segments to deal with six of the most important issues that Americans are focusing on with the upcoming midterm elections. The issues are jobs, green, education, civil rights, justice and immigration. The scheduled speakers include radio host Tom Joyner, singer and activist Harry Belafonte, NAACP president Ben Jealous, civil rights activist Jesse Jackson and American Federation of Teachers president Randi Weingarten.