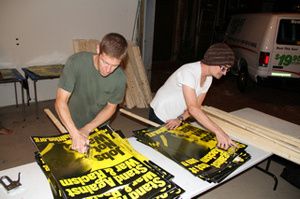 By Anaridis Rodriguez — 10/01/10
Preparation for Saturday’s One Nation Working Together rally is well underway. Friday night at the ANSWER Coalition headquarters in Washington, D.C., dozens of volunteers showed up to make signs for the rally.
“I didn’t count but it felt like I made about a hundred because my hand is starting to go numb,” said Sarah Sloan, ANSWER Coalition’s National Staff Coordinator.
“We are making several thousand signs tonight and people from all over Washington, D.C. preparing their own signs,” Sloan said.
The ANSWER Coalition is a national volunteer based organization that stands for Act Now to Stop War and End Racism. Sloan said the group’s purpose closely mirrors One Nation’s message.
“The overarching theme for tomorrow’s demonstration a rally for jobs equality and peace,” Mark Sadler said.
Sadler is an ANSWER Coalition volunteer who believes the rally will pressure lawmakers into taking action.
“It’s going to put pressure on the government and draw attention to the problems ordinary people are going though,” Joan Drake said.
Drake is one of those ordinary people. She is a longtime activist who says the rally’s historical location will make the event visible to the whole nation.
“I remember listening, I didn’t have a television in 1963, but I remember listening to MLK’s speech on the radio from the Lincoln Memorial and everybody in the country seemed to be listening that night too, we are going to get a very wide viewing and listening audience tomorrow and we hope we can make a difference,” Drake said.
One Nation Working Together is expecting a crowd of 100,000 attendees and will feature speeches from well-known personalities such as Rev. Al Sharpton and radio show host Tom Joyner.