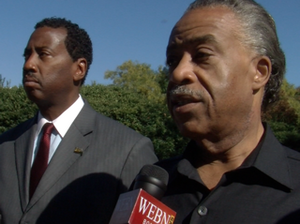 By Anaridis Rodriguez — 10/02/10
Reverend Al Sharpton spoke in front of hundreds of immigrant activists at a feeder rally moments before the One Nation March began here in Washington, D.C.
He said that he mirrors the demonstrators’ sentiments and hopes Congress takes action soon.
“We are here for one nation. I think it’s important to start dealing with immigration rights. We have demonized in many circles immigrants in this country when they are the backbone of the country and made America, America.”
Reverend Sharpton is one of the rally’s main organizers who will speak later on this afternoon at the Lincoln Memorial.