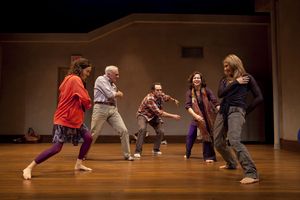 By Justine Frostad— 11/01/10
In Circle Mirror Transformation, playwright Annie Baker depicts the complicated lives of five characters through creative drama games. The play chronicles a 7-week adult drama class that takes place at a community center in the fictional town of Shirley, Vermont.
The creative drama teacher leads four students including her husband through a series of theatre games, but these seemingly harmless drama exercises quickly begin to stir emotions, spark love connections and trigger conflicts.
The drama class at the center of this play leads the audience on a exploration of what happens when a small group of very different individuals at various life stages come together to play seemingly childish drama games that turn out to reveal grown-up emotions and issues.
Marty (Betsy Aidem) is an easy-going, flighty woman who is grounded by real personal struggle that begins to unravel a little more each class over the seven weeks. One of the students is Marty’s husband James (Michael Hammond) who is also the owner of the community center. A former hippie, he seems to be participating in his wife’s class mostly to be a supportive spouse. Theresa (Nadia Bowers) is a confident, upbeat woman who, as it turns out, has legitimate acting experience. She came to Shirley to study massage therapy, leaving New York and her professional acting career behind. The reasons behind this move become clear as the play progresses.
Schultz (Jeremiah Kissel) is a recently divorced, middle-aged man who becomes enchanted by Theresa. This enchantment quickly turns to obsession. Lauren (Marie Polizzano) is a lethargic, cynical teenager who thinks the drama exercises are pointless until her own transformation occurs. Lauren seems to be the voice of the audience calling out awkward moments and the absurdity in certain over-the-top exercises.
There are moments, especially at the beginning of the play, when it is clear how ridiculous drama games seem when taken out of context. However, as Baker proves with Circle Mirror Transformation, a thought-provoking, complex story can come from five people simply interacting.
The show, directed by Melia Bensussen, runs about two hours without an intermission but the cast of characters keeps the audience laughing and the time goes by unnoticed. Circle Mirror Transformation is the first of three plays written Baker who was born in Amherst, Massachusetts. All three of her plays are being staged at BCA courtesy of three local companies.
Circle Mirror Transformation is playing at the Calderwood Pavilion at the BCA through November 14.