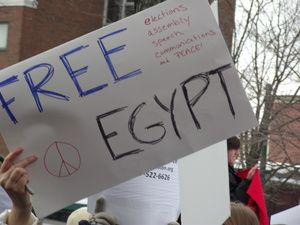 The protest march about the situation in Egypt went from Harvard Square in Cambridge to Faneuil Hall in downtown Boston.
It all started Thursday night when 23-year-old Marihan Hashesh had a plan to show fellow Egyptians that the United States is behind them.
Hashesh made a Facebook event, and in just two days the word spread.
About 500 people made it to Harvard Square and that is a number beyond Hashesh’s expectations. As a result, the protest took an unexpected turn when Harvard Police asked the demonstrators to relocate. So they decided to march down Massachusetts Avenue into downtown Boston.
“The cops forced us to move out but that was good because a lot of people got to see us move,” Hashesh, a descendent of Egypt, said. “It was an amazing success. Only 15 to 20 percent were Egyptians, there were Algerians, Lebanese, Americans, all showing their support for a country they may not even be from.”
The current situation in Egypt was triggered by the success story in Tunisia, where the public sent President Ben Ali into exile, an official from Amnesty International U.S.A said.
“There’s no question that within Egypt there was always simmering discontent,” Amnesty Northeast Regional Director Joshua Rubenstein said. “But the events in Tunisia have galvanized the people of Egypt.”
That same inspiration sparked chants on Harvard Squares as protestors yelled, “Hey Obama you will see, Mubarak will go down like Ben Ali!”
Egyptian President Hosni Mubarak has been in power for 30 years and thousands of people are unhappy with what they see as his dictatorship. Rubenstein said the people of Egypt are demanding free elections.
Six months ago Amr Abdelbaky left Alexandria, Egypt. He said the president is planning for his son to come into power but the people will not rest until Mubarak is out of Egypt.
“It’s not a radical revolution. It doesn’t have anything to do with religion,” the 23-year-old said. “It’s just a revolution for freedom, it’s just a revolution for democracy.”
After reaching Park Street, the procession traveled to Faneuil Hall, where it ended at 4 p.m.
After 3-days of protests in Egypt, President Mubarak addressed his country last night pledging for a better democracy and greater economic opportunity.
In a speech following Mubarak’s, President Obama announced that he had talked with the Egyptian president for half an hour and told him that he has a responsibility to deliver that promise.
Despite his words, the march in Boston called out: “Hey Obama you should know, Hosni Mubarak has got to go!”
Hashesh said she will be watching the situation in Egypt closely, and pending what follows, she will organize further efforts.
Similar protests have broken out in New York and Washington, among other areas of the United States.
Protest for Egypt Chanting