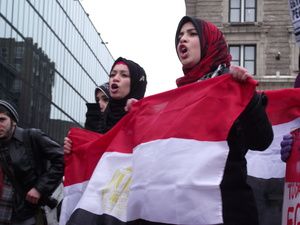 You could hear the beat of their drums and the sound of their chants. Hundreds of protestors in Boston marched around Copley Square today to make clear that they stand united against Egyptian President Hosni Mubarak.
Mona Salem led demonstrators as she shouted, “Muslim, Christian, we are Egyptian!”
Salem is a descendant of Egypt and visits her home country every summer. She said she’s sick of the situation there.
“That’s why we’re here today,” she said while proudly holding the Egyptian flag. “I believe our government is going to listen to us and hopefully do something about it.”
Egypt is the second largest recipient of United States foreign aid, just behind Israel. These protesters believe that this money is funding a dictatorship.
“As an American who gives tax dollars to the 1.3 billion dollar military aid that Egypt receives ever year to oppress its own people, I feel that I should be out here,” said Ian Chinich, a PhD student at Boston University.
Northeastern student Omar Duwaji agreed. He held a megaphone in the center of the crowd shouting. “Not another nickel, not another dime, no more money for Mubarak’s crime!”
Demonstrators repeated after Duwaji while a group of three men played drums to the beat of their chants.
The demonstration is the second of its kind. Last weekend protesters marched from Harvard Square to Fanueil Hall.
In the interim, President Mubarak announced that he will not seek re-election in September.
“He won’t be seeking re-election necessarily, but he’ll stay long enough that his son Gamal Mubarak or someone like them takes power,” said Susan Rizk, who last visited Cairo two weeks ago.
Today President Barrack Obama endorsed a gradual transition in Egypt led by Vice President Omar Suleiman. When that news came across smart phones during the protest, the demonstrators said they disagreed and wanted new leadership.
“I think that freedom of speech and the freedom to free election is a basic human right,” said 27-year-old Rizk. “And I think that we deserve it just as anyone else does.”
Interviews at Copley Square Protest