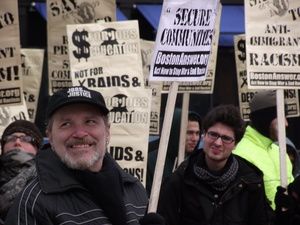 Sounds of applause and frustration could be heard coming from outside the State House. Over 100 people gathered to speak out against Governor Deval Patrick’s plan to join the Secure Communities program.
The program allows local authorities to pass any data attained through police processing to be sent to the Department of Homeland Security and the Department of Justice. The departments will then determine those who are undocumented and may detain and deport people regardless of any criminal record he or she may have.
Many feel that the program promotes racism and racial profiling because even those that do not have a criminal record are at risk for deportation by the Immigrations Customs Enforcement (ICE).
Several activist and political groups were at the event including Green Rainbow Party member and former gubernatorial candidate, Jill Stein.
Stein said, “I strongly oppose the so-called Secure Communities Act, it doesn’t make us more secure, it makes us precisely the opposite. It’s really an invitation to racial profiling and civil rights violations. In the aftermath of yesterday’s incredible victory for human rights and democracy in Egypt it’s time for us to be raising the bar for human rights in MA, not lowering it, which is what the Secure Communities act would do.”
Many felt betrayed by Governor Deval Patrick who previously said that he was against involving local police with immigration issues.
“We say that it’s a very unwise decision by this governor that otherwise has portrayed himself as very progressive, as liberal, as a friend of the people,” said Sergio Reyes of the Boston May Day Coalition. “In this case, we want to tell him that this is not friendly to the people, that this is encouraging racial profiling, that is persecuting and intimidating the immigrant communities that are here to work.”
If the plans goes through Secure Communities will officially become a part of Massachusetts policy in 2013. Chris Gonsalves from the Party for Socialism and Liberation isn’t willing to give up.
“We will protest as long as it takes, we’re planning future actions, we’ll protest until we win full justice not only to win Secure Communities not coming to Massachusetts, but also to win full rights for all people because we believe that’s the only way that’s going to end this criminalization of immigrants.”
Footage from the protest:

Interviews from the protest: