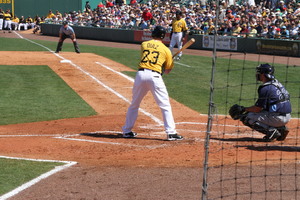 By Samantha Russo — 03/07/2011
The Pittsburgh Pirates haven’t seen a winning season in over a decade. But, manager Clint Hurdle is no stranger to rebuilding a team that’s struggling. Four years ago Hurdle led Colorado to its first National League pennant in franchise history. The Rockies went on to play in the World Series that season but lost to the Boston Red Sox. Also that year, the team compiled the highest single-season fielding percentage in Major League history. Hurdle’s efforts in Colorado earned him a third place spot for the National League Manager-of-the-Year award.
Pirates President Frank Coonelly praised Hurdle’s success with the Rockies saying, “He took a team in Colorado that looked very much like the team we have now… and got them all the way to the World Series.” The players are also excited about what their new manager brings. Outfielder Garrett Jones said “we feel just his presence alone will help us win and help our club get better and we’re just excited to get the season going and play games.”
Pirate’s newcomer Matt Diaz compared Hurdle’s managing style to that of the retired Atlanta Brave’s manager Bobby Cox. “He [Cox] was a players’ manager. He had your back at all times and Clint’s the same exact way. I anticipate he’ll be the one that turns this whole thing around in Pittsburgh.”
The mix of young talent and an experienced manager should make Pittsburgh fans more hopeful for the upcoming season.