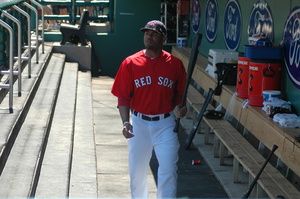 By Benjamin Barker — 03/07/2011
The Boston Red Sox have never been known for their speed. When General Manager Theo Epstein signed Carl Crawford this off-season, he changed the entire dynamic of his team. The addition of Crawford gives the Red Sox two legitimate base-stealing threats, a threat that the team has never had.
Crawford will pair up with centerfielder Jacoby Ellsbury to give the Red Sox one of the fastest lineups in all of baseball. Crawford is much more than just an agile outfielder. The four-time All-Star has racked up 104 home runs and 592 runs-batted-in during his 9-year career.
In 1999 the Rays drafted Crawford who broke into the majors just three seasons later. In just his second season in the Major Leagues, Crawford locked down a spot as one of Tampa Bay’s starting outfielders.
The Red Sox are happy to have Crawford on the team, partly because of how well he played against Boston. In May of 2009, Crawford tied a major league record when he stole 6 bases in one game.
This season, the Sox will look for Crawford to drive in runs from the middle of their order. Jacoby Ellsbury will begin the season as the leadoff hitter, and the two should give opposing teams plenty of headaches in 2011.