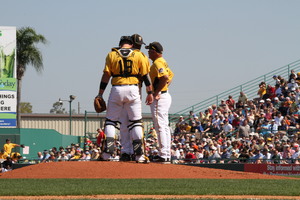 By Greg Burud — 03/07/2011
Tyler Yates went down with the Pirates’ ship. In the eighth inning, Yates took the mound for Pittsburgh and the Rays took home a 4-2 victory. Desmond Jennings hit a sacrifice fly off Yates to give the Rays a 3-2 advantage. Then, Yates walked Justin Ruggiano with the bases loaded. That gave the Rays the cushion they needed. Over four innings, Tampa Bay pitcher David Price allowed only two runs. His effort helped the Rays to their first win in nine games. Price’s only mistake was a Matt Diaz 2-run homer. That gave the Pirates a 2-1 lead in the fourth inning. Five years ago, San Diego took Matt Bush with the first overall pick. Some critics believe Bush hasn’t fulfilled his potential. Now, Tampa Bay fans are hoping he is turning a corner. Bush sealed the game for Tampa Bay and picked up his first save of the preseason. Pittsburgh’s Ross Ohlendorf allowed one run in his three innings of work.