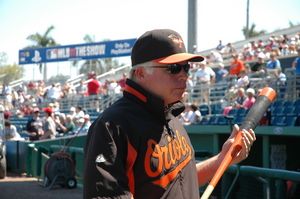 By Benjamin Barker — 03/07/2011
They haven’t made the playoffs since 1997. They haven’t been to a World Series since 1983. Still, there is hope for the Baltimore Orioles. Just one season removed from spending most of last year at the bottom of the American League East, Baltimore now has a roster that can compete in its division.
The team’s success will begin with the man calling the shots. Last year, managers Dave Trembley and Juan Samuel failed to turn the Orioles season around. Near the end of the season Buck Showalter was brought in to take over. He ended up leading Baltimore to a 34-23 record to close out the season. No other American League team played better during that stretch. Showalter returns again this season and this time he has more to work with.
During the off season, Baltimore’s front office added a veteran presence to the young, transitioning ball club. Some veterans are first baseman Derek Lee, short-stop JJ Hardy, designated hitter Vladimir Guerrero and third baseman Mark Reynolds. Managers hope the veteran infielders will set an example for the younger players. But not every position has a new face. Returning Orioles Adam Jones, Nick Markakis and Luke Scott will continue to patrol the outfield in 2011.
The only obstacle standing in the way of Baltimore’s success is the player’s ability to stay healthy. Last year the team was plagued with injuries. Second baseman Brian Roberts missed over 100 games in 2010 due to a herniated disc. New faces Derek Lee and JJ Hardy have also spent time on the disabled list. Lee is coming off thumb surgery and has yet to see action during spring training.
The road ahead for the Orioles is tough. Powerhouses like the Boston Red Sox and the New York Yankees will continue to pose problems for Baltimore’s playoff hopes. But in the end, Baltimore’s revamped roster and dedicated management may be just what the team needs to end their playoff drought.