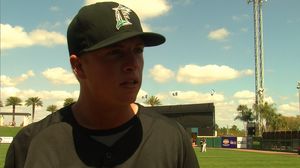 By Samantha Russo
Spring training is an exciting time for fans, players and coaches. But for Marlins rookie Matt Dominguez, it is much more than that. Four years ago Dominguez was the 12th overall pick in the MLB amateur draft and is likely to make his major league debut this season. Dominguez is 21 years old and is currently penciled in as the Florida Marlins starting third baseman. “Just to get the shot to play in the big leagues this year…it’s exciting and I’m looking forward to it and it’s going well so far” he said. The Marlins haven’t had a reliable third baseman since trading Miguel Cabrera, but Dominguez could stabilize the position.
One of the Marlins top priorities is getting Dominguez ready for the big leagues. There are questions about how productive his bat will be. Last year in the minors, he batted .252 and hit near the bottom of the order. Regardless of his shaky offense, Dominguez has shown Gold Glove defensive ability. In recent years, the Marlins have ranked among baseball’s worst defensive teams and having Dominguez at third would take pressure off of their pitchers.
Dominguez says “I need to work on hitting and becoming more confident at the plate.” His work has paid off this spring, because he has boosted his batting average to .308. If Dominguez’s struggles at the plate return, the Marlins do have a back-up plan. All-star infielder Omar Infante has the versatility to play third, but Dominguez will be in Florida’s opening day lineup if he continues to hit.