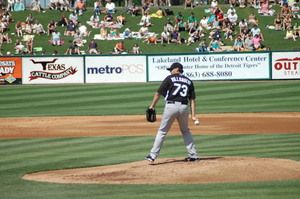 By Nick Coit — 03/08/2011
Matt Dominguez is proving his doubters wrong. Coming into Spring Training, many
baseball experts believed the only thing holding Dominguez back from the majors was
his ability to hit big league pitching. Today, he may have taken a big step forward.
This afternoon, the Florida Marlins defeated the Detriot Tigers, 9-5, behind Dominguez,
who went 2 for 2 with 4 RBIs and a home run. The crowd at Detriot’s Joker Marchant
Stadium in Lakeland, FL, watched as Tigers right hander Max Scherzer got roughed up
for 8 runs on 5 hits in 2 1/3 innings. Tigers manager Jim Leyland was forced to take out
Scherzer after Dominguez sent a ball to the fans sitting on the grass behind the left field
fence.
The Marlins were also impressed with two of their young arms. Elih Villanueva got the
start and pitched three scoreless innings against Detriot’s potent lineup. Burke Badenhop
also pitched in relief, and had four strikeouts over two perfect frames.
Over in the Tigers clubhouse, Scott Sizemore was the main contributor on offense. The
second baseman had three RBIs late in the game, but it was not enough to cool off the hot start by the Marlins.
Tomorrow, Detriot is back in action against the Phillies in Lakeland, while the Marlins
will face Washington at home in Jupiter, FL.