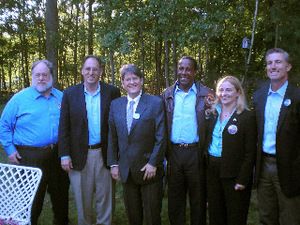 By Leeza Yeretzian — 9/18/2011
The Massachusetts Democratic Senate candidates believe voters need to assess the state of the economy.
So today they went to the Milton Democratic Committee backyard barbecue to see what voters think. The Democrats there answered with thumbs down.
Milton voter Tom Flynn believes that job creation is key but is not sure who is the leader to accomplish that. “We need to turn the economy, and I want to know who’s going to turn it around,” he said.
Candidates Alan Khazei, Marissa DeFranco, Herb Robinson, Bob Massie, Tom Conroy, and Setti Warren each pitched their visions for a stronger economy to the group.
Alan Khazei is an entrepreneur and organizer of the “Save AmeriCorps” coalition. He has a proposal that would allow states to convert unemployment compensation benefits into vouchers. Khazei said his idea was formulated from his frequent meetings with discouraged job-hunters. “I’m trying to both use the market, give people confidence that they’re going to get hired because they’ve got this voucher, and get people back to work quickly.”
After a 657-mile statewide walk, Tom Conroy–State Representative for Lincoln, Wayland, and Sudbury–said his journey helped him learn almost every concern of the people of Massachusetts. “My intent is to stay on the people’s pulse, their concerns, their priorities and their day to day challenges.”
As Massachusetts endures a 7.4 unemployment rate, newly released and challenging Census data cited 46.2 million Americans living in poverty.
Setti Warren has been Newton’s mayor for almost two years. He called this economic state “unacceptable.” He wants to invest in education so people can enter a competitive market with a reliable skill set.
Harvard law professor and consumer advocate Elizabeth Warren, who recently announced her candidacy for Senate, did not attend the event.
The Democratic candidates are vying to compete against the incumbent Republican Senator Scott Brown.