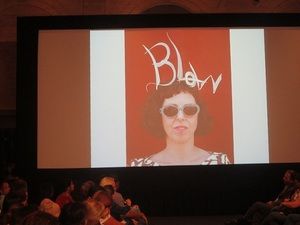 Monteiro’s collection earned a standing ovation at this year’s Boston fashion week show. The pop music was blasting. The stage lights were beaming, and the cameras were flashing for the young designer during her final walk with her models.

Monteiro’s showing included four of her new collections. Clothing pieces in Shock Therapy, Enamour Sport, the Isabella Blow series, and the Monarch each offered a fierce, new look for the fall season.

The show started on a casual note with adults and children sporting designer jeans and T-shirts. But as soon as Monteiro’s Isabella Blow series hit the runway, the audience erupted with applause.

Fashion icon Isabella Blow and Queen Victoria were two of Monteiro’s inspirations. She said, “They’re just two strong women that started a fad, and they were looked at as iconic in their generation. So I thought it was important to show my work through them.”

Blow was a fashion magazine editor for British Vogue. She discovered fashion designer Alexander McQueen, and mentored milliner Philip Treacy and model Sophie Dahl. She was infamously known for her outrageous hats and red lipstick. In May 2007, the fashion industry lost Blow to a tragic suicide.

Her legend remains in designers like Monteiro, who earned a design degree from the Massachusetts College of Art and Design. This was Monteiro’s first time directing her own fashion show. The up and coming fashion designer said her ultimate goal is to open her own flagship store. But for now, Monteiro is enjoying the success of her first big introduction to the fashion industry: Everything Enamour.