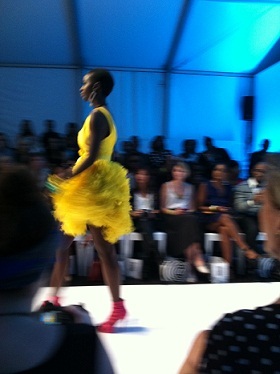 By Leah Mishkin –9/25/2011 The tent lights dimmed. The audience was presented with bold and bright colors that certainly were not designed for the fashionably faint of heart.

The 29-year-old designer was born in Haiti. He made it clear that his native land was the inspiration for his latest collection. He describes the fairytale aspect of his collection to be the “dream of Haitian men and women to come to New York City and dress as fashionistas, but still stay true to their farmer and fishermen roots.” Jean-Baptiste also said his maxi dresses and the textures of the bags and wooden jewelry were influenced by the Caribbean.

The vibrant colors of his collection are meant to represent Haiti. The turquoise color of many of Jean-Baptiste’s dresses was inspired by Kaliko Beach, located in Port-au-Prince, Haiti. The pinks in the collection came from the Southern Haitian town of Jacmel. The designer said that the grays are reminiscent of the Kenscoff Mountains of Haiti.

Jean-Baptiste premiered his collection at this year’s New York Fashion Week and said “it was a great success.” Those attending described his collection as “a breath of fresh air.” Jean-Baptiste said his pieces are meant to be “young, fun, and hip.” Among his many influences, the designer lists the fashion powerhouses of Chanel and Dior.

The ambitious designer also offered some advice for the next generation of aspiring designers. His greatest advice saying to “have standards and don’t compromise them for anyone.” That is when he plans to “take it up a few notches for next spring.”