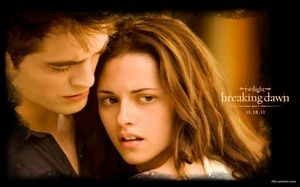 By Logan Leavitt — 11/20/2011
The fourth installment of the “Twilight” movie series has hit theaters.
Robert Pattinson and Kristen Stewart are back as the stars in the vampire flick, “Breaking Dawn: Part 1.” The movie begins by bringing us the wedding of Pattinson and Stewart’s characters Edward Cullen and Bella Swan. However, Swan soon finds out she is unexpectedly pregnant with Cullen’s vampire child and the dilemma whether she can keep the baby begins.
Taylor Lautner also returns as Jacob, the jilted werewolf who continues to express his love for Swan even though she is now happily married. The movie takes you through Bella Swan’s 9-month pregnancy and the effect it has on the whole cast of characters. The rest of the actors in supporting roles return as well. Anna Kendrick is back as Swan’s best friend, although she has very limited lines. Ashley Greene and Kellan Lutz also return as members of the Cullen family dealing with Edward’s decision to marry a human.
This movie was lacking in a lot of areas. Stewart seemed lifeless through the entire movie, lacking any character in her voice and seemed disinterested in her role. There weren’t many memorable moments in the film. Even the birthing scene was extremely graphic and over-the-top at times.
However, there were two aspects that saved this film from being a complete disaster. Lautner did an excellent job with his role, keeping the hope alive that Stewart would reconsider and choose to love him. However, he also was believable and brought the only action in the entire movie. The dose of humor added into this film also may have saved it. There were a few funny moments unlike any of the three previous “Twilight” movies.
Twilight fans will thoroughly enjoy the return of the movie series. However, they may leave the theater disappointed with the poor performances and the lack of memorable moments in the vampire flick.