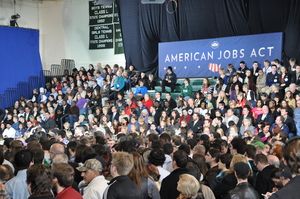 By Colleen Shaughnessy — 11/22/2011
President Barack Obama came to New Hampshire today, urging Congress to vote in favor of his American Jobs Act.
The President gave a speech at Manchester Central High School during his first visit to New Hampshire in nearly two years. The state has been very influential during recent elections and has shifted Republican since Mr. Obama had been elected in 2008.
There was a sense of urgency when President Obama said Congress is voting next week to extend the payroll tax break which will expire next month. He says the break saves the typical middle class family about $1,000. He added that the jobs bill will increase the break to $1,500.
“Don’t be a Grinch. Don’t vote to raise taxes on working class Americans during the holidays,” President Obama said.
He explained that the bill will cut taxes for small businesses. Also it will help boost the economy and increase jobs.
Mr. Obama targeted GOP lawmakers who have stalled the bill. “The next time you hear one of these folks from the other side…talking about raising your taxes, you just remind them that ever since I’ve got into office, I’ve lowered your taxes, haven’t raised them,” he said.
There was some offense from the Republican side. Today former Massachusetts governor and Presidential candidate Mitt Romney took out an ad in a local paper saying toPresident Obama, “I will be blunt. Your policies have failed.”
The President’s speech was interrupted by Occupy protesters chanting, “Mr. President, over 4000 peaceful protesters have been arrested while bankers continue to destroy the American economy.” President Obama said he understands their message. “A lot of the folks who’ve been down in New York and all across the country in the ‘Occupy’ movement, there is a profound sense of frustration, there’s a profound sense of frustration about the fact that the essence of the American dream, which is that if you work hard, if you stick to it that you can make it, feels like that’s slipping away,” he said.
The President says tax breaks should not only benefit target the wealthiest Americans. If Congress votes no next week “taxes go up,” he said. “Yes, you get a tax cut….Which way do you think Congress should vote?”