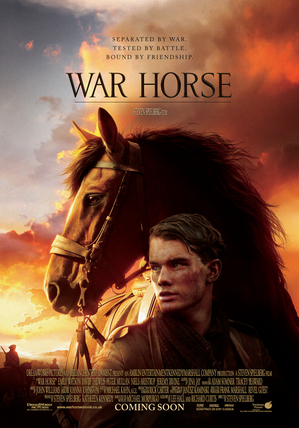 By Elah Davidson — 12/01/2011
The race to the Oscars has begun, and “War Horse” is in the lead. Steven Spielberg’s latest war epic has found a way to bring new emotion to a commonly told story.
Spielberg has tackled the war epic time and time again, but this time he tells the story through the eyes of a horse. In “War Horse” he’s managed to use the horse to encapsulate how the innocent are thrown into the inescapable horrors of World War I. It brings charm through storytelling and cinematic magic along with striking visuals even in the darkest of battles.
“War Horse” weaves the simple tale of a boy and his horse. The first twenty minutes drag on, but then the film gains speed. It begins with the birth of a young colt named Joey. He is sold to the Naracotts to be used as a work-horse. They are a family in desperate need of money to save their farm. Albert Naracott is played by newcomer Jeremy Irving who develops a relationship with the horse that is tested in 1914, at the breakout of World War I.
Joey’s adventure begins when he is enlisted alongside countless other soldiers in the efforts against the Germans. When Joey is bought by Captain Nicholls, (played by the up and coming Tom Hiddleston), AlbertNaracott makes a promise that he will find his friend (the horse) again.
The cinematography and emotion more than make up for the contrived dialogue. Well-known actors sprinkle the film with their appearances, but the beauty of the story calls for the audience to connect with an actor whose only verbalization is a subtle whinny.
Spielberg creates battle scenes that tug at heartstrings rather than the grandeur of explosions he favored in ” Saving Private Ryan.” One shot of soldiers mounting their horses rising as one from their hideout in a wheat field in France can’t help but take one’s breath away.
But it is a scene in No Man’s Land between the trenches of German and British trenches that capture the feel of the film. Joey has been running through body-strewn fields and cannon scarred mud when he is trapped in barbed wire. One German and one British soldier slowly make their way to cut him free. They talk of home and are enamored by Joey’s beauty and the human war that brought him hundreds of miles from home. And as the Oscars approach, “War Horse” is still in the running.