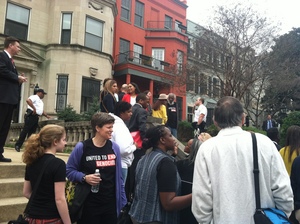 By Kate Spalla 3/16/12 — George Clooney is continuing his fight for peace in Sudan. This time he has taken it to Washington, D.C.
Earlier today Clooney was arrested for civil disobedience at the Sudan Embassy. He and a crowd of about 100 other demonstrators want there to be peace on the Sudanese borders.
Niemat Ahmadi who is from Darfur told WEBN that she appreciates his help. “The work that George Clooney has been doing is just great because he uses his capacity, his skills, his deprecation to advocate for the people of Sudan.”
Ahmadi said Clooney’s arrest shows he is willing to sacrifice his humility. Protestors gather at the Sudan embassy often, but Clooney’s arrest helped bring media attention to the cause.
“Other people seem to be arrested and nothing else has happened,” said an onlooker, Rudolph Sipio, who has visited other Sudan Embassy protests.
Police arrested several other demonstration leaders, including Martin Luther King III and several Congressional members.